Departure from Malta was planned for 1st May 2012.  This was delayed by a day as we had a bit of deck work that required completion.  John joined us over the weekend, spending a few days exploring Malta before helping us ready the boat and ourselves for the start of the next leg of the trip.  We ended our time in Malta by attending a International Firework Competition in Valletta.  It was a chilly night but the displays were spectacular. The Maltese Falcon was in Valletta which was quite ironic as it had been in Falmouth the week we left there.

Our thanks to Steve and Sue from 'Insideout' for the tickets. A final meal at the yacht club and restaurant Guze was required and enjoyed by us all. 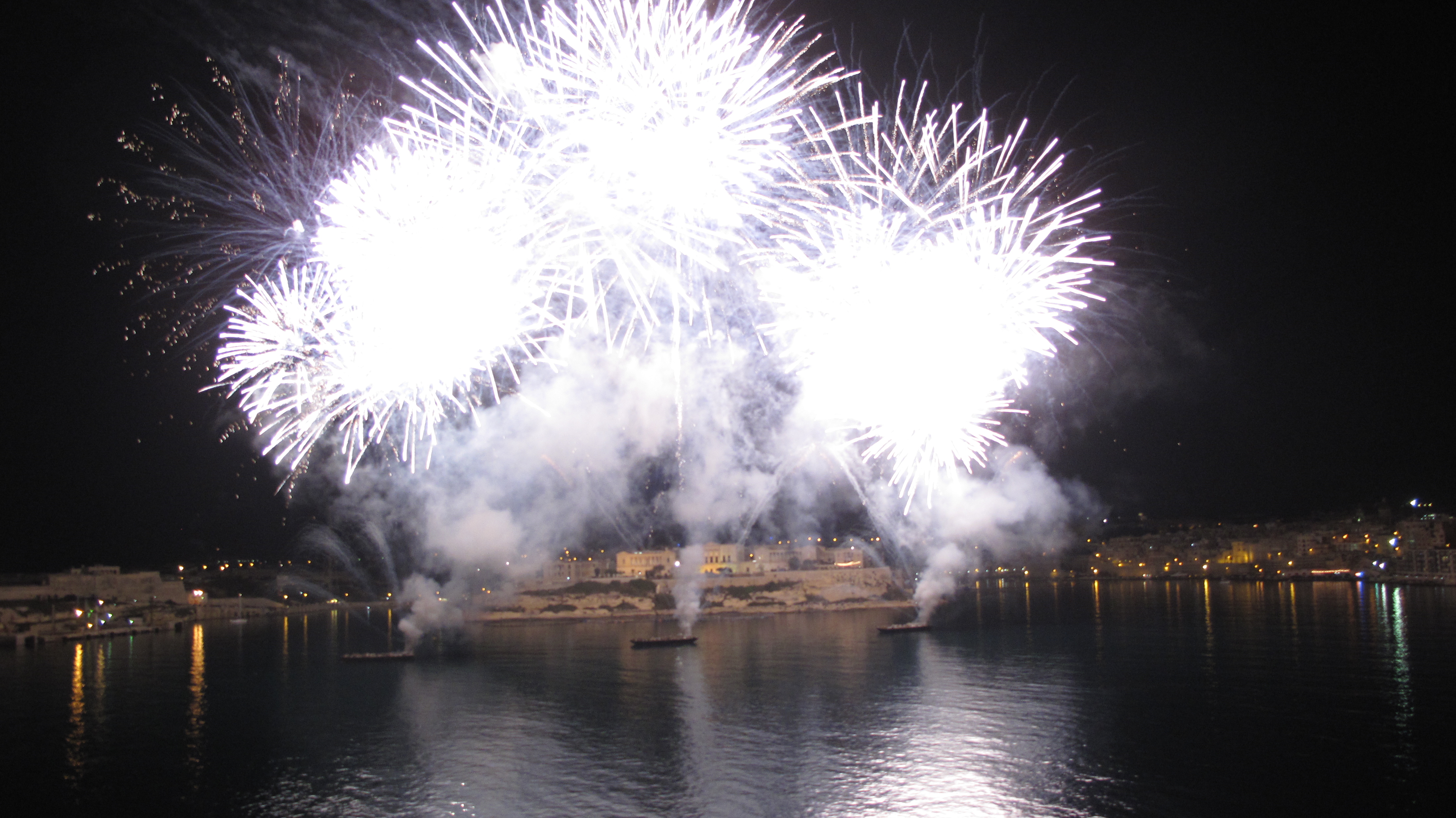 Malta has been left behind!  We have travelled over 400 miles in two weeks.  Marzamemi  was  our first stop in Sicily on our outward journey from the Med.  The yacht club there was just recovering from having the Royal Malta Yacht Club weekend race a few days before we arrived.  The Club raced from Valletta to Marzamemi, a dinner on the first night (Saturday), an interclub race on Sunday and return race to Valletta on Tuesday.

From Marzamemi we motor sailed to Syracuse as there was very little wind, and what we did have was on the nose.  Syracuse is a lovely town – very pretty with lots to offer.  We really enjoyed our day there.  Whilst there we noticed a mid-sized yacht called JP2 and flying a picture of Pope John Paul 2 – this yacht appeared in our journey later on. 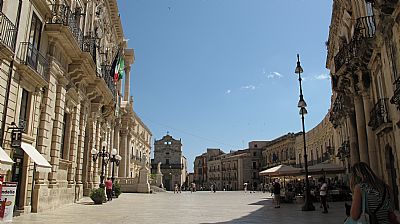 After Syracuse we motor sailed to Riposta.  We were unable to reach the Marina by radio or telephone so decided just to ‘arrive’.  As usual our timing was right in the middle of Siesta time so there was no-one in the office but a nice marinero met us and we were able to tie up alongside next to the office.  A lovely Bistro/Bar at the end of the Marina provided us with most welcome refreshments and nibbles.  Later in the evening a walk back down to the Bistro was necessary for a Gelato.  It was a great feeling to be sitting on board under Mount Etna with a glass of wine.

The volcano was still smoking after its eruption earlier in the year and the town, including a lot of the boats in the marina, were covered with black grit which had ‘rained’ down during/after the eruption.  On our journey from Riposta to Messina we were privy to an unusually clear view of Mount Etna and her snowclad slopes on the north side.  The guide books indicate that normally you can’t see the summit of Mount Etna as she is usually clad in cloud but this proved to be contrary to the norm on our visit as we had wonderfully clear views.

pic: Riposto sitting under Mount Etna and the street showing the ash.

pic: Mount Etna from the marina

Messina proved to be the usual rip-off that we have come to expect here.  Three glasses of wine in the Piazza Duomo cost us E17 with a further E30 at the Marina bar for another 3 glasses with nibbles!  The Marina cost of £88 a night was a bit excessive as well but we bore it well – fortified by the expensive wine!!!  The Straits of Messina proved to be mild and pleasurable on our departure from Messina.  This was John’s first trip through the Straits so it was nice that there was no drama.  The Force 7 Gales arrived hours after our departure out of the Straits (and are predicted to last all week).

From Messina we headed to the Aeolian Island of Volcano.  Peter and I have visited here previously (about 8 years ago) but we were excited to be visiting again.  Parts of the town have changed but overall it was almost the same.  We tied up at the local marina, which was in the process of laying their pontoons for the season.  The Marinero’s were very friendly and helpful and insisted on moving us to the opposite side of the pontoon for a more comfortable berth overnight.  We then took ourselves up the volcano (walking) to the still smoking crater.  Ever mindful of the warnings not to go near the vent holes for fear of poisoning, one member of our party decided to get a bit closer for some spectacular photos!

A most excellent pizza was dinner in the local pizzeria and was enjoyed by us all.  On returning to the yacht after our meal we found yacht JP2 had moved along the pontoon and were tying up alongside us in the dark.  As there was no lighting we put on our deck light to help them out.

pic: An old smokie on Isola Volcano and  looking back at the island as we left.

We left Volcano early in the morning and headed to Cefalu, managing to get a five hour sail, for which we were all gratefull and thoroughly enjoyed, even though it meant sailing south when we wanted to go south west.  The wind, as predicted, did come around to the north closer to the mainland, allowing us to sail more to our desired course.  The engine had to go on for the last part of the trip.

Cefalu was another port that Peter and I had visited previously and were delighted to return to.  We had a lovely walk through the town, bought some nice local bread and biscuits, ending the evening with dinner at a local restaurant.  On our return to the Marina yacht JP2 was again tied up near us.  As the next day there was to be a ceremony in the Duomo with a visit of the toe of JP2 we guessed that this was one of the highlights of their journey!

pic: view from our table at the restaurant and inside the Duomo.

Wednesday morning we were en route to Palermo, a journey of 30 miles.  Unfortunately there was absolutely no wind so it was a motor sail all the way.  We set our course to avoid the Traffic Separation System (TSS) at the entrance to Palermo harbour (which meant crossing the whole bay before heading into the Marina).  When we arrived in the bay however there was no movement of shipping at all – not even a fishing boat!

We were afforded a berth in the Marina Villa Igiea (Aquasanta) at a cost of E110 which included water and electricity.  We accepted the cost for one night but were sorely disappointed in the facilities.  Toilets and showers are a nightmare– lots of hot water but rust, saggy floors, green slime, no privacy all led to an Ugh! experience.  We managed to negotiate the local bus system and went to visit the Duomo (Cathedral) in Palermo with a walk around the various tourist attractions before heading back to the boat via the local supermarket.

pic: Old Gate near the Cathedral

At our shopping stop we stopped to watch a Lidl bag full of shopping being hauled up to the third floor of the flats on a block and tackle.  This is something that is quite common around Sicily, however on this occasion things did not go to plan.  No sooner had John taken out his camera to capture the moment than the handle of the bag broke, sending the shopping crashing to the ground in a cacophony of sounds.  The resultant screeching, waving of hands and beating of chests had us feeling sorry for them but doubled over in laughter and beating a hasty retreat….

From Palermo we headed west again to Castellammare del Golfo – a small but attractive town with a big welcome.  The Marinero came out to meet us outside the harbourin his ‘mini boat’ ,  guide us into a berth, tie us up and recommend various places to visit and eat.  We had a most enjoyable evening with a promenade along the Lungomare, to the Mother church, sampling the local wines and dinner in a waterfront restaurant.

pic: Castellemmare del Golfo and evening view over the marina to the town

Arrival at Trapani, on the northwest corner of Sicily, was exciting with a sail all the way and a visit by  long finned Pilot Whales on our Starboard side. We approached the harbour on the Yankee sail only with a speed of 7.5 knots.  The best sail of the 2 weeks!  This was probably predictable as a huge front is moving our way and will keep us in Trapani for a few days.  We won’t mind though as the town has turned out to be very pleasant, friendly with some lovely places to see (Along with a wonderful Gelataria)!

The marina (Marina Levante) couldn’t be better with the most helpful staff, an outdoor seating area, washing machine and easy access to town, transport etc.

pic: Trapani from the cable car

Saturday was spent visiting the medieval town of Erice on top of Mount St Guiliano and reached by a 3km journey by cable car up the 700 metres to the top.  The town is very pretty and well worth a visit with spectacular views all around – from the bay on the north and west to the mountains on the east and the flat land of fields and salt pans to the south.

Our planned departure from Trapani was delayed due to Lorraine flying home or a couple of days to see an elderly relative.  We will now be departing Trapani around 24th May as a second weather front has moved in with high winds, rough seas and rain for the past 4 days.  Forecasts look to improve on Thursday although any wind will either be in our face or non existent.